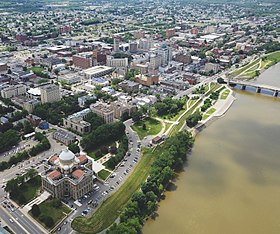 Your Roofer In Wilkes-Barre PA

Wilkes-Barre and the surrounding Wyoming Valley are framed by the Pocono Mountains to the east, the Endless Mountains to the north and west, and the Lehigh Valley to the south. The Susquehanna River flows through the center of the valley and defines the northwestern border of the city.

Wilkes-Barre was founded in 1769 and formally incorporated as a borough in 1806, and as a city in 1869. The city grew rapidly in the 19th century after the discovery of nearby coal reserves and the arrival of hundreds of thousands of immigrants who provided a labor force for the local mines. The coal mining fueled industrialization in the city, which reached the height of its prosperity in the first half of the 20th century. Its population peaked at more than 86,000 in 1930. Following World War II, the city's economy declined due to the collapse of industry. The Knox Mine disaster accelerated this trend after large portions of the area's coal mines were flooded and could not be reopened. Today, the city has around half of its peak population of the 1930s, making it the largest city in Luzerne County and the 13th-largest city in Pennsylvania. The contiguous network of 5 cities and more than 40 boroughs all built in a straight line in Northeastern Pennsylvania's urban area act culturally and logistically as one continuous city, so while the city of Wilkes-Barre itself is a smaller town, the larger unofficial city of Scranton/Wilkes-Barre contains nearly half a million residents in roughly 200 square miles.