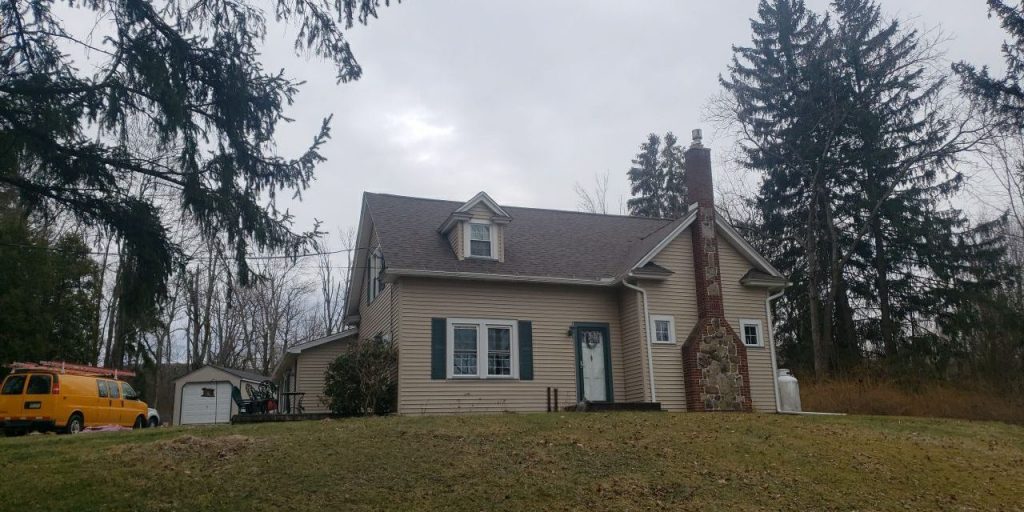 Your Roofer In Pennsylvania

First settled in 1822 by the Jones family, the town was first called The Stock Farm and later Jonestown or Jones Pond. The first farm was located at the south end of the lake. Although when the village was first settled, it was populated by only a few family farms, Jonestown soon expanded due to the Pennsylvania Coal Company's Gravity Railroad. It brought workers and soon businesses were needed to fulfil their needs, including a post office named Ariel, which would later lead to the change in name of the town.

The center of Lake Ariel is the setting of most of the community's businesses, although there are numerous others.

Lake Ariel also contains many churches and religious institutions. St. Thomas More's Catholic Church is located in the center of the community, while several Protestant churches are located at various places in the community.

In Lake Ariel, there was the Lake Ariel Elementary School. Children from third to fifth grade attended this school. It was part of the Western Wayne School District which also has schools in the nearby communities of Waymart, Hamlin, and Varden. It was torn down in 2016.

Western Wayne's newest school, Evergreen Elementary, opened August 31, 2011. It is located on Route 191 between Lake Ariel and Hamlin. The school replaced Lake Ariel Elementary and Hamlin Elementary and houses pre-k through fifth grade. According to the Western Wayne School District website the projected cost of the school was $18 million. The new facility is the premier 'green' school in the state. The school attained the Leadership in Energy and Environmental Design Silver Certification for its use of geo-thermal heating and cooling, and solar and wind energy.

Our Mission in Lake Ariel

At The Roof Brothers, we are dedicated to providing our Lake Aerial clients with the highest level of knowledge, best materials and professionalism when it comes to taking care of your residential or commercial roofing needs. To that end, our Lake Ariel Office is fully prepared with some of the best roofing materials to fix any roof in any condition. Our team takes strides to adhere to the highest standards of professionalism, knowledge and satisfaction

We use only top quality roofing materials and we are Owens Corning preferred contractors! So you can rest assured your roof will be built to last. Plus, our team has years of experience working on roofs in the Lake Ariel area, so we know how to deal with any challenges that might come up. So don’t wait any longer, call the Roof Brothers today by dialing 570-862-6775

A Wide Range of Services

Mike Holley and his team are highly recommended and professional contractors in lake Ariel PA who have been working with local clients for over 10 years. Mike Holley is an Owens Corning preferred contractor and one of the most prestigious roofing and gutter contractors with high end reviews on Home Advisor. As a fully licensed and insured roofing company, we are versatile. This means that we are capable and more than willing to deliver all kinds of roofing services excellently. Our roofing contractors are friendly and will walk you through the process of your roofing project to ensure that your wishes are honored until the end. We offer all types of roofing services including new installations, replacements and inspections. We also do maintenance work on your current shingle roofs to keep them in good shape!

Our Lake Ariel roofing team can take care of any size job- big or small.

If your home’s roof is in need of a replacement, our expertise with asphalt shingle roofs is second to none. Though there are many different materials and styles available to suit whatever look or budget you have. Shingle roofs offer an attractive style that can be installed quickly with help of a professional roof contractor; however they also degrade easily over time which means this type may not last more than ten years before needing to be replaced! Some types such as wood shakes require extra work but come at lower cost compared to other options making them worth considering if money isn’t too much concern while others provide excellent durability so customers don’t mind spending just a bit extra.

Roofs are a key part of the home that need attention, whether it’s for replacement or just routine maintenance. Asphalt shingle roofs can be maintained with simple care and they have been proven to last multiple decades if repaired when needed!

New gutter installs can be a confusing process. There are many different types and sizes, as well as varying levels of slope that need to be considered when installing your guttering system in order for it function properly- but do not fret! Our team has been trained on all aspects so we’ll take care everything from start (or finish) point inspections through final connections ensuring you have what’s needed at every stage without any surprises or wasted time or expenses along the way!

Feel free to peruse our website and learn about our services and policies. We believe you will find them far above average, and we look forward to proving with top quality services and professionalism

You can contact us today at 570-862-6775 to find out more about The Roof Brothers or to schedule an appointment or free roof estimate. We will be happy to address all of your concerns either in person or over the phone.

Our residential roof services consist of excellent craftsmanship and only the best in A-grade roofing materials. Your home is guaranteed to look better than it ever did before with the help of The Roofing Brothers.

Asphalt shingle roofing is an affordable roofing material that is easy to install, maintain and is loved by homeowners across northeast Pennsylvania

Tile or slate roofing offers your home a curb appeal unmatched by any other roofing material. Have your house stand above the rest with this industry-leading roofing option.

Not only do wood shingles create the most beautiful roof but they also add a lovely nature-inspired aroma to your home. They are also highly energy-efficient and eco-friendly.

Not only do our Scranton, PA gutter installation services provide durability, but they also offer a visually pleasing finished appearance for your home. The process begins when our gutter experts do a thorough evaluation of your home’s gutters. Once we know where the issues are, we’re able to recommend the proper solutions at the ideal price point